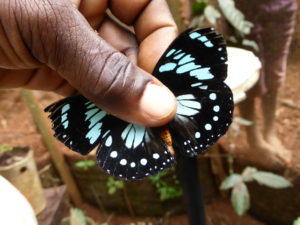 In August 2013, through the support of the Simon Cumbers Media Fund, Joseph O’Connor and Paul Loughran travelled to Tanzania to discover how one butterfly farming project is educating local communities on the importance of protecting the environment whilst giving women a stronger voice in their villages.

The Amani Butterfly Project is a non-profit organisation, established in 2004, that helps four hundred rural Tanzanians from six villages in the East Usambara Mountains to farm and market native butterflies. The mission of the project is to raise much-needed income for the locals, while providing an incentive for maintaining the high biodiversity of the forest and thus promoting environmental sustainability in the region. The project has also had a positive knock-on effect for gender equality in participating villages as it encourages women to train to be butterfly farmers. Revenue for the project and income for the farmers are generated by exporting butterflies to live exhibits in Europe, with the main buyer based in the UK.

One of the participating villages in the project, Fanusi, has been able to develop a new running water system with the revenue raised through the butterfly project.

Although facing some tough challenges in the future with the introduction of new EU regulations on the exporting of live animals, the Amani Butterfly Project has made a significant positive impact for a number of villages in the East Usambara Mountains; tangible results seen by Joseph and Paul during their recent visit.

A photographic exhibition of the Butterfly Effect runs at the Irish Aid Office on O’Connell Street, Dublin, until the end of March. The exhibition will then move to the Northside Civic Centre in Coolock, Dublin 17.

The impact of the war in Ukraine on world food security- Jane-Ann McKenna, Dóchas CEO @ Near FM (2022)