Starting on Tuesday March 14th @ 3pm, this radio series captures the best in Irish and international based composers and musicians performing in front of a live audience.

As well as the performances, Near FM have recorded in-depth interviews with the musicians, and reactions from members of the public. 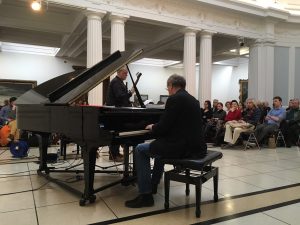 Programme one features jazz music duo Lars Jansson and Ronan Guilfoyle. They have been performing together for many years and in this programme they are collaborating on Lars own compositions.

Reminiscence on the Radio: 1968

Two Moons – Listen To My Story