Produced by Paul Loughran. Interviews by Ken Tuohy. Thanks to Ber Quinn on audio recording. 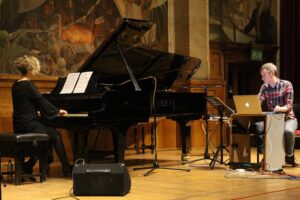 About the series
The Hugh Lane Concert series showcases contemporary, traditional, classical and jazz music concerts recorded at Dublin City Gallery The Hugh Lane, as part of the Sundays @ Noon concerts. This radio series captures the best in Irish and international based composers and musicians performing in front of a live audience. As well as the performances, Near FM have recorded in-depth interviews with the musicians, and reactions from members of the public. Series 1 & 2 is available here