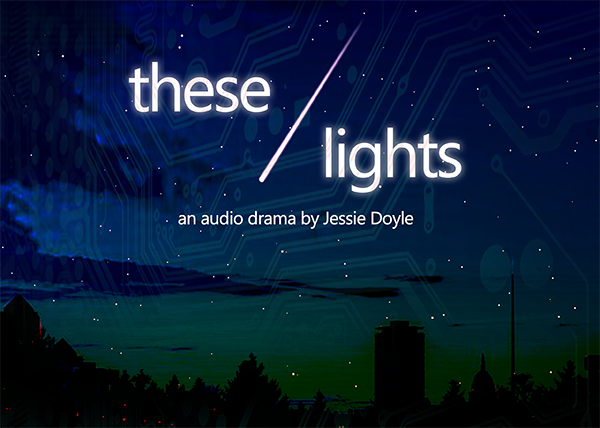 The first in a monthly anthology of new radio drama, is These Lights, written and performed by Jessie Doyle. Broadcasting on International Women’s Day, March 8th at 1pm on Near FM 90.3

Set in the not so far future and taking place in a very different but at the same time very familiar Dublin where the entire population are implanted with computer chips that control our information, control our emotions, regulate how we behave and control how we feel. The Government takes responsibility for our security. They isolate threats to keep us safe. The important decisions are made by people who know better than us.

The story follows two sisters. One who rejects the controls put in place and craves freedom, the other finds comfort and security within these systems that she feels she can trust and depend on.

But Strange Lights are appearing over Dublin and these two sisters are about to experience the end of the world through an explosion of spoken word, sci-fi drama featuring futuristic music and audioscapes.

These Lights was broadcast on
International Women’s Day, March 8th at 1pm

These Lights is supported by the Broadcasting Authority of Ireland Sound and Vision scheme with the television licence fee.