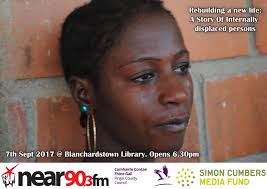 In March 2017 radio presenter with NEAR FM Nwabuogo Enwerem, travelled to Nigeria to document the lives of the IDPS “with the support of the Simon Cumbers Media Fund”. titled  “Rebuilding A New Life : A Story Of Internally Displaced Persons” a documentary on the aftermath of Boko Haram and Fulani herdsmen attacks on the  lives and livelihoods of the people of some communities in Northern Nigeria, Sub-saharan African, especially  the  women and children in these communities after their communities were destroyed by the attack.
Hear the stories of Godiya a 22 year old widow who ran on foot for two days looking for safety with two of her surviving children aged 10 and 4 after her husband was killed by Fulani herdsmen and  Rejoice who fled when her community was set on fire by Boko Haram, running on foot for days without water or food with her baby and watched a pregnant women deliver her baby in the desert between Nigeria and Cameroon.
The people that survived  are currently dwelling in what is called IDP camps in the following places New Kuchingoro in  Abuja, Model Primary School Takau,Kafanchan in Kaduna State, Interfaith Community in Nasarawa State and Eleghusi ghetto, Lekki, Lagos State.
Produced & Presented By:
Nwabuogo Enwerem