Maura Walsh chats to Elaine Gallagher, ahead of her Upcoming-‘History of the Bicycle’ Comedy Shows 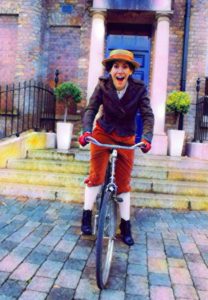 Maura Walsh chats to Elaine Gallagher, Irish Writer, Director, Producer and Stand up Comedian ahead of her Edinburgh Preview Shows at A4 Sounds Studio, on Sun 8th July and Sin É on Sun 15th July, both starting at 8 pm.

They speak about the history of the bicycle. The most feminist of machines and the part it played as a symbol of women’s emancipation and suffrage.  Elaine has performed at venues across Ireland, as well as in New York, L.A., San Francisco, Toronto and Montreal. She is currently previewing her one woman show, “The Freedom Machine” ahead of its 26 show run at the Edinburgh Fringe Festival in August – (1-27th).
There are a worrying number of “ists” in society today – racists, sexists, and even fascists – who’d have thought they’d make such a comeback?!
For her debut Edinburgh shows, she has decided to focus on a positive “ist” in society – the cyclist! The Freedom Machine is a hilarious audio-visual stand up show, which celebrates 100 years of women’s suffrage by exploring the revolutionary bicycle. This work premiered at Smock Allies: Scene + Heard 2018.
Presenter: Maura Walsh.
Interviewee: Elaine Gallagher.