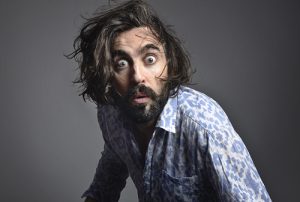 Aindrias de Staic chats to Norma Burke about his upcoming show in Dublin but also about homelessness, the contribution of the Irish language to slang and how we can find art and music in the objects around us.

Seven Shades is another comedy storytelling extravaganza by Aindrias de Staic. It details the plight of a man who simply can’t stop acting the bollox BUT IT IS NOT AUTOBIOGRAPHICAL!!! Armed with a fiddle, a loop peddle and some epic stories, de Staic returns to Dublin for more craic but this time he’s taking his Latchikos with him for a very special night in Whelan’s.

Back by popular demand, after it’s sell-out run in the International Bar as part of Dublin Fringe Festival, Seven Shades introduces de Staic’s alter ego- Shamadeus McDonagh- a good looking musician from the West of Ireland (STILL NOT AUTOBIOGRAPHICAL!!) who has to go on a journey of self-discovery deep in the far east……. East mayo that is, to address his deeply rooted character defects and learn what is really important to him.

Catch de Staic, and The Latchikos once more when he treats the Capital to an extraordinary DOUBLE-BILL performance with full-LATCHIKO-lineup after storytelling show in Whelan’s on November 26th at 8 PM.

“The Seven Ages of Man / Like It Or Not”