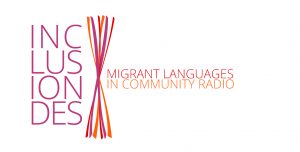 The InclusionDes project, funded by Erasmus + adult education, aims to explore the process that enables the participation of migrants in community radios in the countries/regions where the project partners are based (Ireland, France, Germany, Hungary and Spain) and extrapolate a set of best practice guidelines that can be used for other community radios to review their participation and access processes with a view to facilitate migrants access to media resources. (To simplify this document and the scope of the project we have decided to use the term ‘migrant’ to encompass individuals residing in countries other than their country of origin, independently of their legal status or the reasons why they have to relocate). The project coordinator is Radio Kultura (Baiona, Basque Country) and the partner organisations are Civil Radio (Budapest, Hungary), Radio Wüste Welle (Tübingen, Germany), Radio Enlace (Madrid, Spain) and Near FM (Dublin, Ireland).

As part of the project, we held a round table discussion with some of Near FM’s migrant producers, where they discuss their motivation to engage with community radio, among other issues. Our panel included Silvia Bernal and Victor Flores (Radio Latina), Kasia Sudak (Polska Tygodniowka), Kelly Tavalossi (Samba Boys), and Piero Cafarelli and Sebastiano Toscano (Radio Dublino). The programme was first aired on 21st March 2017 at 6 pm.