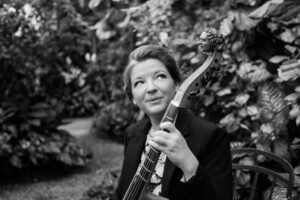 Welcome to episode 24 in The Hugh Lane Concert series, Near FM’s long running music concert series, recorded in the beautiful surrounds of Dublin’s Hugh Lane gallery. In this episode we are delighted to present Romina Lischka on the Viola de Gamba. Performing works by Demachy, Tobias Hume, Sainte Colombe and Marin Marais.

Romina Lischka studied viola da gamba with Paolo Pandolfo at the Schola Cantorum Basiliensis (Basel, Switzerland) and was awarded her soloist diploma “with distinction” in 2006. Alongside her activities as a gambist, Romina also studied North Indian classical singing (dhrupad) at the World Music department at the Rotterdam Conservatory (Bachelor, 2010) and in India (Delhi and Pune) with Ustad Fariduddin Dagar en Uday Bhawalkar.

First broadcast on August 24rd 2022 at 2pm on Near FM. The concert was recorded and mixed by Neil Farrelly. Interviews by Ken Tuohy, and programme mixed by Paul Loughran. Thanks to Mary Barnecutt and all in the Hugh Lane gallery, Dublin. Made with the support of the Broadcasting Authority of Ireland Sound and Vision scheme through the Television Licence Fee.