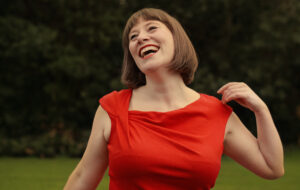 As part of the Hugh Lane Gallery’s Sundays at Noon series and in association with the Contemporary Music Centre, Elizabeth Hilliard presents this recital of works written for her voice by three distinguished composers. The opening work is a world premiere: Sleepsong by Siobhán Cleary. The next work is also a world premiere: Shroud by Christopher Fox. The final piece is Gráinne Mulvey’s The Seafarer. This programme features the full performances interspersed with interviews with Liz and the composers, by Linda O’Shea Farren and Mary Barnecutt.

First broadcast on Tuesday November 1st, 2022 at 2pm on Near FM. The programme was produced by Dorothee Meyer Holtkamp. The concert was recorded and mixed by Paul Loughran. Interviews by Mary Barnecutt, and audience reactions by Neil Farrelly. Thanks to all in the Hugh Lane gallery, Dublin.

Made with the support of the Broadcasting Authority of Ireland Sound and Vision scheme through the Television License Fee.