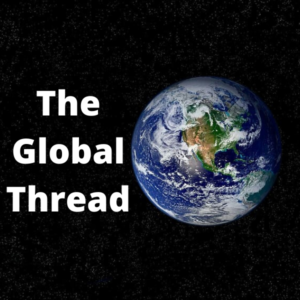 The Global Thread, is a special four part series that will raise public awareness of active citizenship around the United Nations Sustainable Development Goals.  Produced in partnership with Comhlamh, this series will focus on gender equality and reproductive rights; sustainable energy and extractive industries; deinstitutionalisation of children’s care and economic inequalities.  Each programme features interviews with people at the frontline in fighting for a sustainable future for our planet.

Episode 1: Mining for Hope
The first programme of the series, compiles the testimony of 3 activists in Ireland
and Argentina who will take us through the work they do to ensure that sustainable
energy policies are a priority in the political agenda. Mining causes massive
ecological damages, and often accompanied by human right abuses against people
trying to protect their land. Amidst this, there have been notable success as the
result of the grassroots campaign that, for example, banned fracking in Ireland,
which can be understood as a contribution to Ireland’s commitment to the United
Nations’ Sustainable Development Goals.

Interviewees
Lynda Sullivan, a writer and human rights activist. She currently works for Friends
of the Earth, Northern Ireland. Previous to this she spent five years accompanying
the indigenous campesino communities of the northern highlands of Peru as they
resisted the imposition of a mega mining project that would destroy their water
supply and ancestral lands.

Sian Cowman, who previous worked as a human rights defender involved with
solidarity campaign during her time with the Centre for Democracy in Bolivia, who
will speak about mining in Colombia and ramifications in Ireland.

Esteban Servat helped spark the global anti-fracking movement after he published
a secret document during the Macri administration in Argentina that showed that
the fracking industry was contaminating water. He is currently living in Germany
after being forced to leave his country due to death threats.

Produced by Mark Malone (Comhlamh) and Sally Galiana (Near FM)

The Global Thread – Women on the March

The Global Thread – Get me out of here