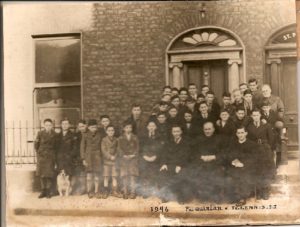 The series will chart out those forgotten moments of Dublin history, a Dublin that has now been taken over by office blocks and apartment schemes. Hear the boys tell their stories, about those lifelong friendships, the impact that these clubs had on them, their families and their communities. Clubs featured in the series include St Francis Xavier Boys Club, Brú Mhuire, Belvedere Newsboys.
The series begins on Monday 27th September 2010 at 2.00pm and can be heard on local community radio station, Near FM.

The Boys Club is devised and produced by Beaumont resident, Joe O’Connor, a former member and leader with St Francis Xavier Boys Club and his son, Near FM volunteer Dave O’Connor, with the assistance of the Sound & Vision Fund, a Broadcasting Authority of Ireland initiative