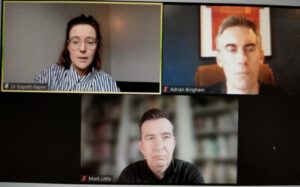 ‘The media provides a vital public service for our society. It is fundamental to our democracy. It underpins how people stay informed, and how they engage with Ireland’s language, culture and sport.’ – The Future of the Media Commission

Near FM Social Benefit programming is made with the support of the Broadcasting Authority of Ireland.

Adrian Bingham is Head of Department and Professor of Modern British History at the University of Sheffield and Senior Associate of the History & Policy initiative in the UK.

Adrian has worked extensively on the British national popular press post-1918. His books include Gender, Modernity, and the Popular Press in Inter-War Britain (Oxford, 2004) and Family Newspapers? Sex, Private Life and the British Popular Press 1918-1978 (Oxford, 2009). He is currently working on a project entitled ‘Everyday Politics, Ordinary Lives: Democratic Engagement in Britain, 1918-1992’, supported by an AHRC Leadership Fellowship.

Adrian has significant experience in consultation for public policymaking and has contributed to media debates about historical child sexual abuse and press regulation in the UK. His historical evidence was cited in four public reports on the Jimmy Savile scandal in 2014-15 and his research cited in the 2012 Leveson Inquiry. He has co-authored numerous policy papers and media articles, and in January 2018 he was awarded, with colleagues Louise Jackson and Lucy Delap, the first Royal Historical Society Public History Prize for Public Debate and Policy. He currently serves on the External Advisory Board of the Schuler Democracy Forum at the Trinity Long Room Hub.

Mark Little is the inaugural Schuler Democracy Forum Media Fellow in the Trinity Long Room Hub and founder and CEO of Kinzen.

Mark spent 20 years in broadcast news, as a reporter and presenter for RTÉ. He was the station’s first Washington correspondent, and in 2001, he won the Irish TV Journalist of the Year award for his reporting from Afghanistan. He has been anchor of the current affairs programme Prime Time, and is the author of three books on the US and world affairs. In 2010, he founded the world’s first social news agency, Storyful, which was eventually sold to News Corp. He has also worked for Twitter, as Vice President for Media in Europe and Managing Director of its International Headquarters. In 2017, he co-founded Kinzen, which combines editorial skills and artificial intelligence to protect online conversations and communities.

Mark served on the Irish Future of Media Commission and, as part of his work at Kinzen, is currently engaged in discussions on regulation and disinformation in media practice.

Elspeth Payne is the Coordinator of the Schuler Democracy Forum and Research Fellow at the Trinity Long Room Hub Arts and Humanities Research Institute. The Forum brings together Arts and Humanities researchers and media practitioners to interrogate questions relating to democracy, media, technology and communication. Elspeth also works on the renegotiation of Anglo-Irish relationships in the British press between 1922 and 1932

Near FM live from Golden Years in Darndale