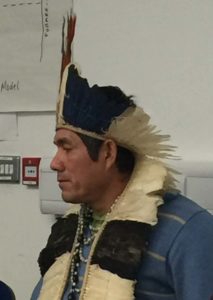 In January 2003 the news of the death of Guarani Kaiowa leader Marcos Veron reached Ireland. He had been in Ireland in 2002 as part of a European tour organised by Survival International and in a meeting hosted by the Latin America Solidarity Centre (LASC).

On January 11, Marcos led a group of about 100 Indians in a retomada (or retaking) of traditional indigenous land, now occupied by the Brasília do Sul ranch. The following day, the rancher sent in gunmen to reclaim the ranch. Marcos was severely beaten and left unconscious by the roadside, apparently with a fractured skull.

Fifteen years after his father visit to Ireland, Ladio Veron, now chief of the Takuara community, leader of the ATY GUAÇU – general assembly of the Guarani-Kaiowá – was the key speaker in several of the Latin American Week event’s organised by LASC and co-funded by IrishAid.

Here he speaks to Inaki Irigoien of how the situation hasn’t really changed for the Indigenous peoples in Brazil.