If Ever You Go: A Northside Dublin Perspective Part 1 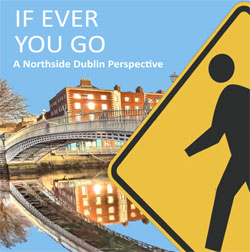 Nearfm have produced a ten part radio series reinterpreting the Dublin: One City One Book ‘If Ever You Go: a Map of Dublin in Poetry and Song’ edited by Pat Boran and Gerard Smyth. This series takes a unique look at the book from a northside Dublin perspective by focusing on the poems, poets and songs associated with Northside Dublin.

The series features many well known poets reciting and being interviewed about the poems they have featured in the book including Paula Meehan, Theo Dorgan and Dermot Bolger as well as up and coming poets such as Colm Keegan, Jessica Traynor and Alan Jude Moore.

Poetry recital contributions for the series were made by Mary McNamara and Michael Sharp from the Near Drama Company.

Programme 1:
– Dedalus Press/Book editor – Pat Boran
– Director of Dublin: One City One Book – Jane Alger
– Director of Poetry Ireland – Maureen Kennelly
– Vox Pops on how poetry is perceived and approached from local public and St Davids NBS/public
– If Ever You Go to Dublin Town by Patrick Kavanagh – read by Michael Sharp