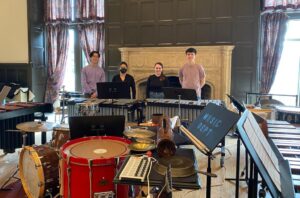 The RIAM Percussion Ensemble is one of Ireland’s leading exponents of music for the medium. The Ensemble is directed by Richard O’Donnell, RTÉ National Symphony Orchestra’s Principal Percussionist. The ensemble perform here as winners of the RIAM ChamberFest Dublin Prize 2021, which included an engagement with the Sundays at Noon concert series, and a radio documentary about the group by Near FM, which first broadcast on June 14th, 2022 at 2pm.

The programme was recorded by Near FM and Ber Quinn. Interviews by Ken Tuohy, and programme mixed by Paul Walsh. Thanks to Mary Barnecutt and all in the Hugh Lane gallery, Dublin. Made with the support of the Broadcasting Authority of Ireland Sound and Vision scheme through the Television Licence Fee.