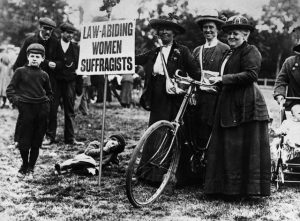 To celebrate the important historical role of bicycles for suffragettes and the emancipation of women 100 women dressed as suffragettes will be cycling in the St Patrick’s Day parade under the #freedommachine banner.

Freedom Machine has one hundred women of all ages in suffragette costume with their bicycles in the parade, hand crafted replica period banners, sashes and placards, followed by a smaller group of their family, supporters and members of the Dublin Cycling Campaign on bicycles and cargo bikes.

The American civil rights leader, Susan B Anthony, wrote in 1896:“I think the bicycle has done more to emancipate women than any one thing in the world. I rejoice every time I see a woman ride by on a bike. It gives her a feeling of self-reliance and independence the moment she takes her seat; and away she goes, the picture of untrammelled womanhood.”

Donna Cooney, an Artist, Activist, Campaigner and Cyclist developed the Freedom Machine concept and also co-ordinates the team of Artists, makers and participants in the Dublin Cycling Campaign for the St. Patrick’s Day Parade 2018. She joined Norma Burke on Near FM to talk about it.